"The Many Faces of Cardew's Treatise" An Updated Portfolio 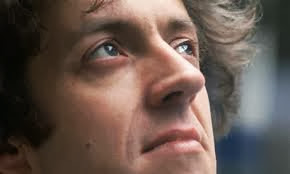 For any number of musicians with any instruments, may be performed whole or in part. 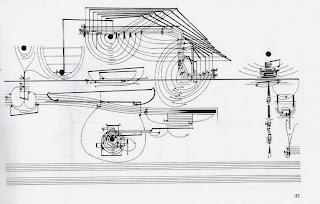 Earlier this year,  I gave a lecture at Pace University on graphic notation and alternative tablatures.

This particular lecture, which is part of my series on the subject of notational systems, was focused on Treatise.

Here, I wanted to share some of the research and performance variations I presented.

Version One, from the Quax Ensemble, 1967 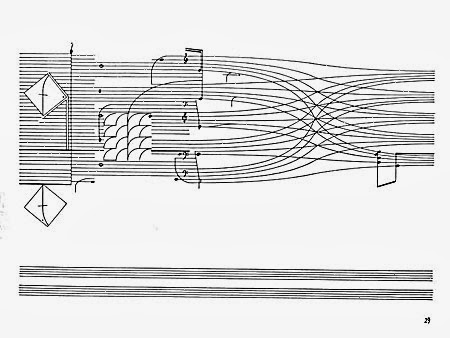 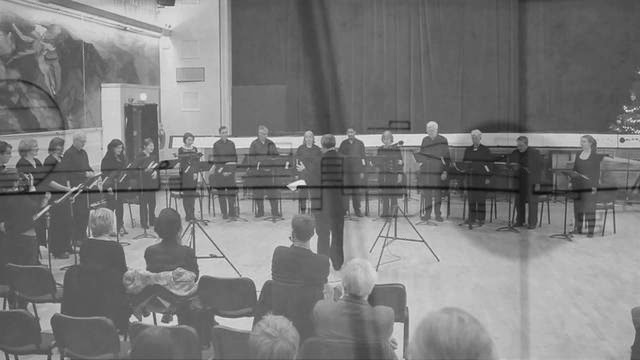 This performance of Cardew's monumental 193-page graphic score Treatise was recorded live in Prague in 1967 by the Czech QUaX Ensemble, directed by composer/flutist/conductor Petr Kotik.


This historical recording offers a unique perspective to hear Treatise as interpreted by Cardew's contemporaries.
Kotik met Cardew in Warsaw in 1962, and they began exchanging scores by mail, including Treatise, which was a work in progress. Upon meeting again in London (1966), Cardew provided Kotik with
additional portions of the score and insights.

Fresh from this encounter, Kotik started the QUaX Ensemble upon his return to Prague in 1966. The first thing QUaX did was to rehearseTreatise, working through the pages Kotik had: "The piece was very important for getting all of us together, musically speaking, besides having a lot of fun working out individual pages by having all the musicians contribute ideas and suggestions.

We worked regularly over a long period of time, ending up with a 2-hour version of the piece ... only performed once, at the concert on October 15, 1967 in Prague." It is presented here.
Cardew said: "Treatise is a continuous weaving and combining of a host of graphic elements (of which only a few are recognizably related to musical symbols) into a long visual composition, the meaning of which in terms of sound is not specified in any way. ... Any number of musicians using any media are free to participate in a 'reading' of this score ... and each is free to interpret it in his own way.

Tilbury says of this performance: "There is much to admire in this 1967 version of Treatise by the QUaX Ensemble from Prague: the feeling of spontaneity, its uninhibitedness, the rough-hewn sounds, the accidental, the half-intended, the blurred."

The older I get the more inclined I am to think that life's not about finding the right answers but asking the right questions. And if you're looking for interesting (musical) questions to ask, you can't do much better than Cornelius Cardew's Treatise. This 193-page graphic score, which occupied the composer for four years, and which performers are encouraged to interpret any way they feel appropriate (though useful tips abound in the Treatise Handbook Cardew published in 1971) is rich, elusive and thought-provoking enough to keep you busy for a lifetime. You ask Keith Rowe.

This October 1967 recording of the work - not the complete score, as Petr Kotik's liner notes here make clear (it would have been nice to know which pages were performed...one assumes not the last 50, which Cardew completed in Buffalo earlier that year) - comes from a concert in Prague, and features flautist Kotik with four other members of his QUaX ensemble, tenor saxophonist Pavel Kondelík, trombonist Jan Hyncica, percussionist Josef Vejvoda and pianist Václav Zahradník. The tapes have been carefully restored and remastered, but there's still plenty of vintage analogue airiness to the sound.

It's abundantly clear that the musicians were grappling with something difficult here, and that they'd spent some considerable time preparing their performance. And, although Treatise has often attracted free improvisers, we're definitely not talking anything goes n'importe quoi (I have serious doubts about some of the other available recordings of the work, though); you can hear the players thinking, both in the long stretches of silence and in their explorations on instruments "none of us really knew how to play."

It's a huge, sprawling performance, 128 minutes long, with more stumbling and soul searching than flashes of inspiration, but one imagines Cardew would have approved of that (John Tilbury does, in the booklet), though I wonder what he'd have made of Zahradník's cocktail bar comping on disc two. Not so sure I like it much, but, if "every honest utterance makes sense" (Cardew), it certainly has its place here along with Kotik's squeaking trumpet (played with a bassoon reed) and bouncing ping pong balls. All in all, this is a disc to admire and respect more than love - which is fine, because that's just the way I feel about Treatise.


This version from Pianist, Nicolas Horvath


In Nicolas Horvath's  performance, Treatise, is interpreted and performed in the framework of Noise / Power Electronics music. The performer Nicolas Horvath is an active pianist and composer acquainted with wide range of musical theory and practice, and indeed has an ample repertoire from Franz Liszt to Philip Glass.

Utilizing his knowledge of, and peculiar sensibility to, contemporary music, Horvath constructs abstract, creaking, and dizzying waves of pure electronic noise to reincarnate Cardew's ideas in an entirely new fashion. In this way Horvath try not only to offer another interpretation of Treatise, but also to demonstrate that harsh noise can have a real music form.

Although the score of Treatise allows performers considerable freedom of interpretation, there seems to have been no attempt to perform this piece in such an absolutely harsh manner as Horvath does.

Recommended for all those who are seeking another intriguing form of musical experiment.

This is a sung realization of the complete work, which took place at "The Engine Room" (a Cardew festival at Morley College, December 9-11, 2011).
Originator and director, Jane Alden, Wesleyan University
Singers: