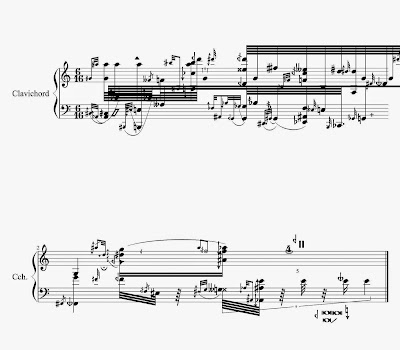 
Zizek talks about fetishistic splits, in which subjects – especially late modern subjects  (The Clavichord)– has specific knowledge but behave as if they don’t.

This dynamic is one side of the “what counts as a belief” coin for Zizek, who would insist that beliefs that don’t affect action are in a sense not “genuine” beliefs.

The other side of the coin is that suppressed beliefs which do affect action are real beliefs, even if they’re hard to fit into traditional epistemological frameworks because they’re inaccessible to the subject...hence, the clavichord.

Definition of the Day...

"Compositional Multimodality ... in the broadest sense, composition which contain a multitude of semiotic modes.

Multimodal scores call for new systems of analysis proficient in realizing and describing the rapport between expressive modes."
Posted by Bil Smith at 2:45 AM