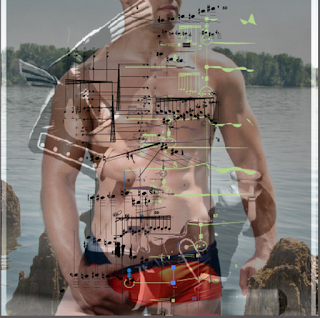 "Pixar's Carrit. An Annunciation of a Trans-Literate Pudenda"
Bill Smith Composer (2011-2012).
For String Orchestra and String Quartet.
This work was realized with a generous commission from Kuwait Airways, a new partner of Laboratorie New Music.
We are thankful for their support and contribution to this project.
SoundCloud Recording:

Murray Gell-Mann (Nobel Prize Winner for his works on quarks) has suspected that many measurements for complexity have been an expressive currency deliberately unproductive, however, Bil Smith’s “Pixar’s Carrit…et al” fulfills a central role of identifiable parallels.
There is a certain degree of rejection; misperception; interpolation; superfluous gesture.“In terms of this work; it returns to the question (necessarily) avoided by formal negation of the work.It’s material…interpolation is taken from others and cultivates the ideals of integral styles.Smith rebels against the orientation towards negation, which at times’s can restrict the complexity of life’s thoughts.

“Centrism” is a helicopter soared overhead; this work makes him uneasily aware that his long delayed confrontation of musical musculature would soon take place.

This work is the manifestation of his neural drama that at last had arrived…but it’s fun too.

- Thom Carter for The Guardian