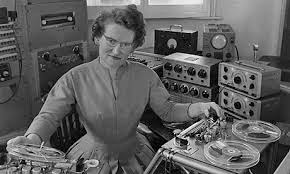 Born December 31, 1925, in Wiltshire, England, Oram studied piano, organ, and composition while attending the Sherborne School for Girls and in 1943 received an invitation to continue her education at the Royal College of Music; she nevertheless declined the offer to accept a position as a music balancer with the BBC, a job largely comprised of overseeing broadcast sound levels and creating special effects for radio dramas. 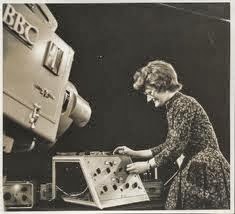 As World War II raged on, Oram was also called upon to "shadow" live performances with recorded versions of the same music in the event a concert was interrupted by enemy attack. An inveterate night owl, Oram spent untold late nights in the BBC studios experimenting with tape recorders and electronic sounds, writing a series of groundbreaking compositions highlighted by 1950's "Still Point," a 30-minute piece fusing orchestra with pre-taped instrumental sounds played from 78 rpm discs in tandem with live treatments.

Historian and lecturer Hugh Davies later cited "Still Point" as the first written music to manipulate electronic sounds in real-time, as opposed to introducing pre-taped material as an adjunct to a live performance -- unfortunately, the piece was never presented live or recorded, a fate that befell the vast majority of her most revolutionary work.

For close to a decade Oram remained in the background both literally and figuratively, given few assignments beyond creating aural backdrops for myriad BBC productions. In 1957 she was commissioned to score the radio dramaAmphytryon 38. Employing a sine wave oscillator, tape recorders, and a handful of homemade filters, she created the first wholly synthetic score in BBC history, so impressing network brass that they finally agreed to finance a new facility devoted to producing electronic content.

The BBC Radiophonic Workshop opened in 1958 in the BBC's London studio Maida Vale. While Oram was installed as director, co-founder and fellow Beeb engineer and composer Desmond Briscoe (fresh off his own success scoring Samuel Beckett's "All That Fall") was named manager. While The BBC Radiophonic Workshop initially focused on experimental drama and so-called "radophonic poems," creating effects from the sci-fi serial Quatermass and the Pit as well as the hugely popular comedy showcase The Goon Show, its pioneering tape-manipulation techniques would become commonplace in sound editing facilities across the globe, and its evocative sonic palette (typified by Delia Derbyshire's landmark electronic interpretation of the theme to Doctor Who) remains a primal inspiration for successive generations of DJs, producers, and programmers. 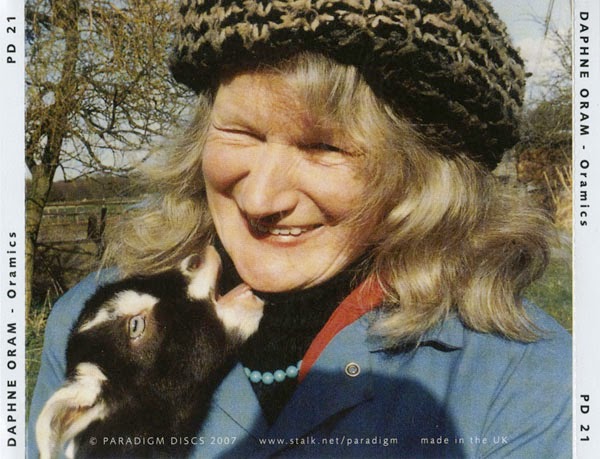 But Oram's tenure at the workshop proved brief. In early 1959, she resigned from the BBC, frustrated by the network's continued refusal to push electronic music into the foreground. Settling into Tower Folly, a converted oast house in Kent, she assembled her own studio and continued preliminary work on what is now known as Oramics, a system she began developing while still at the BBC.

Similar in concept to Yevgeny Sholpo's Variophone optical synthesizer, the Oramics synthesizer encompasses a large, rectangular metal frame upon which pass ten synchronized strips of clear sprocketed 35mm film. Shapes and designs etched into the filmstrips are then read by photo-electric cells and transformed into sounds. Because the output was monophonic, multi-track tapes were required to create polyphonic textures.

The flexibility of control over the nuances of sound production afforded by the relationship between graphics and audio signals nevertheless positioned Oramics as a viable and innovative approach to electronic music production, however, and Oram continued refining her principles across a series of installations and exhibitions. In 1961, she collaborated with film composer Georges Auric to score the Deborah Kerr horror feature The Innocents, and a year later completed her first LP, Electronic Sound Patterns, in addition to writing advertising jingles for brands including Nestea.

Referring to the Oramics equipment, Oram wrote, “One lifetime is certainly not long enough to build it and explore all its potential.” And in fact the Oramics system would eventually move way beyond the drawnsound concept to become part of a far-reaching philosophy of sound. She later described Oramics as “the study of sound in its relationship to life”.

In 1960, as the Oramics studio was taking shape, Oram wrote a futurological manifesto updating Bacon’s New Atlantis and outlining a future soundhouse based on her own hopes and aspirations. She titled it “Atlantis Anew”: “We have also soundhouses, where we practice the healing powers of sound; where we analyze each human being’s innate waveform and induce those harmonics to resonate which have fallen out of sorts; where the criminal is put into a harmless, restful sleep until his mental powers have come to terms with themselves and he is again in harmony with mankind; where man and beast are given the means of communication, one to the other, so that man despises not the animal kingdom, nor any other form of life, no, nor even the ‘inanimate’, but humbly learns the wisdom derived from contact with another aspect.

“Here we learn the harmonic series of the elements, the cycles of the years, the oscillations of the tides, and the induced resonances from those forces far out in space. We explore the sounds which move boulders, the overtones which transmute the metals, but moreover, we acknowledge the wavelength of our own time and respect the existence of beings without that time, finding thereby means to produce summation tones penetrating the very fundamentals of these worlds beyond our frontiers. For here we excite by the subtle higher frequencies the inner consciousness of man linking him, in truth, with the infinite timelessness of that still point where all is comprehended.”

While setting up the Oramics studio, she had discussed with Graham Wrench the possibility of exploring music therapy with the Oramics machine. However, it was agreed that such quasi-scientific applications should be explored later, and that presently there was a void to be filled in the artistic sphere. Also at this time, financial pressures meant it was necessary for her to maintain her work as a commercial composer, which conflicted with her desire to research into the more occluded aspects of sound. Two grants from the Gulbenkian Foundation in the early 1960s supported the development of the Oramics apparatus.

It is here that a marked separation can be discerned between ‘Commercial Oramics’ and ‘Mystical Oramics’. Oram sought a steady stream of commissioned work to maintain the studio, putting her electronic music and musique concrète skills to use. However, of all her extant recorded compositions, only a small proportion make significant usage of the Oramics equipment, perhaps the most notable being Contrasts Essconic, which was devised in 1963. It was almost as if the possibilities suggested by the Oramics machine and hand-drawn sound were so profound that Oram had moved beyond thinking of the system in terms of mere music, and had begun to envisage it more as a means to access the realms of metaphysics.

The Oramics equipment provided a holistic approach to sound, whereas conventional synthesizers offered merely a linear approach, with chains of modules connected in sequence. The Oramics machine allowed for close analysis of the interactions between different parameters, and the subsequent modification or amplification of any unpremeditated interplay. These studies of the subtle nuances and interactions between sonic parameters led her to explore the outer reaches of human perception.

Some time around 1970, Oram read Breakthrough To Creativity by Shafica Karagulla, an American neuropsychiatrist who had diverged from her orthodox medical background to examine the concept of Higher Sense Perception. Faced with ever-diversifying fields of science, New Age thinkers were beginning to formulate unifying theories through the linkage of disparate phenomena. HSP encompasses precognition, remote viewing, night vision, seeing auras, dowsing, magnetic healing and psychokinesis. In Breakthrough To Creativity Karagulla asserted that these abilities indicated a stage of evolution, and that the ‘sensitives’ endowed with them possessed “supersanity”, or a new “sense of frequency”, which allowed for an ingress of experience derived from unknown dimensions.

Eager to establish a new source of funding, Oram explored the possibility of officially affiliating her Oramics work with Karagulla’s HSP Research Foundation in Beverly Hills. The challenge of studying HSP from an artistic and electronic standpoint greatly appealed to Oram, who quipped in a letter to Karagulla, “I am somewhat sensitive in the HSP fields.” She saw the potential of the Oramics machine in exploring unexplainable effects attributed to vibration.

One discovery she had made on the Oramics machine involved the reorientation of an individual’s sensory perception during periods of intense concentration on subtle sonic nuances. It was a complex perceptual phenomenon that she would later crystallize in An Individual Note, but in a letter to Karagulla she attempted to explain it as a “shiftingof-the-perception-centre-so-that-another-aspectis-attained”. She had already encountered this effect with the PAT machine, where small alterations of the voice inflections altered the emotive ‘meaning’. Oramics revealed this to be an overwhelmingly subjective matter. 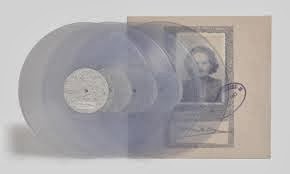 Oram's most significant work during the 1960s was created in collaboration with composer Thea Musgrave, most notably the pioneering Four Aspects, a tape composition that in approach and atmosphere uncannily anticipates by 15 years Brian Eno's ambient masterpiece Discreet Music. Musgrave later assisted Oram's tape contributions to the 1969 ballet Beauty and the Beast as well as the compositions "Soliloquy" and "From One to Another I," each written for solo instrument and tape (guitar and viola, respectively). A substantial grant from the Calouste Gulbenkian Foundation eventually enabled Oram to walk away from her commercial commitments, and within a few years of publishing her profoundly metaphysical 1972 book An Individual Note of Music, Sound and Electronics, she even abandoned composition to devote all of her focus to advancing Oramics.

She was quick to embrace computer technology, acquiring an Apple II computer in 1981 and with the assistance of programmer Steve Brett devising a simple digital equivalent to the Oramics hardware; six years later, she moved to the new Acorn Archimedes, teaching herself assembly language in the process. Between 1982 and 1989, Oram also taught weekly electronic music classes at Canterbury's Christ Church College.

She suffered several debilitating strokes during the mid-'90s, and was forced to move into a nursing home.Oram died in relative anonymity on January 5, 2003, less than a week after her 78th birthday; as of this writing, the majority of her music remains unavailable.
Posted by Bil Smith at 2:03 PM