In this composition, I provocatively flaunt my affinity for a number of ‘lost causes’; primarily
an obtuse blend of musical theory and thought, but, also, the theoretical lost causes of the relation of notational language (understood rhetorically) and tablature systems (understood as hegemonic). 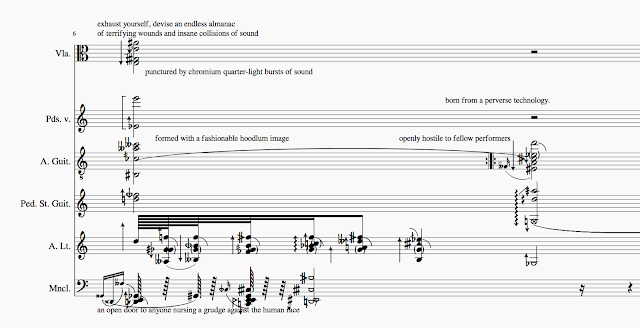 This becomes one of sonic identity in so far as each also shares in the partial affective logics of the objet petit a: ‘rhetorical mechanisms’.

Although I seek to rehabilitate the ‘kernel of truth’ in totalitarian compositional regimes, the central discourse of the music is a reworking of the limitations of liberalism and the end of global ambitions rather than in detailed support for any ideological formation of a new music.

There is no deeper fact or theory that is needed to—or that can—explain why a composition is true, and it is a sort of philosophical illusion, perhaps one in need of a cure, to suppose that there is. Some works involve truth or related semantic notions. Realists often advert to abstracta to explain them, but the deflationist counters with a simpler story.


The compositions of arithmetic, for instance, do have truth values, and no gimmicky paraphrases (according to which our compositions really mean something very different from what we naturally take them to mean) are needed to show this.

There simply isn’t any deep, profound philosophical explanation of the truth (of the true ones), and we need to be cured of hankering for one. In a similar spirit some argue, that the composition is a perfectly respectable sentence, but it is just a redundant and rather obscure way of saying guess.