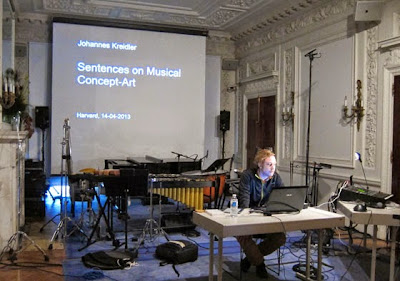 1. A concept piece is Determined by a trenchant idea.
2. The idea is a machine did Produces the work of art.
The Process Should Have No Necessary intervention, He should its
own course take (LeWitt 1967/69).
3. The concept system today is Especially the algorithm.
4. The processing material the machine today is the total
Archive.
5. Details, rhetorical devices and formal design are
Mostly just adequate in the form of ready-mades or by
Random Number Generator.
6. For each work of art That is Performed physically, there
many unexecuted variants (LeWitt 1969).
7. The sensitive appearance is only one aspect of the work,
can be granted to the more or less value.
8. Each piece of new music has conceptual shares (Spahlinger
2009).
9. Not all ideas have to be Realized (LeWitt 1969).
10. From many different concept versions or pieces
but you can turn compose a detailed form.
Enrichment with jokes is so okay.
11. A trivial idea you can not through a beautiful or
Save expressive design. By contrast, it is difficult to
to bungle a good idea (LeWitt 1969).
12. A Good Idea but you can bungle by
beautiful or expressive design.
13. Ideas are the most expressive and most beautiful ever.
14. Improvisation is rare musical concept art, only
Not When the improvisation is good.
15. Musical Conceptualism is a kind of minimalism.
16. An idea is the smallest possible whole (Musil 1916).
17. The music does not have to be self-explanatory. Ander Medial
Admixtures (text, video, performance) need composer-conceptualists
Not Shy, They are even
Consistently articulate (no important information in
Hide program booklet).
18. Contact me nor to publish the smallest idea When
do you think That is something off about her. But put it in
a proportionate cost (not for A Little Idea
More than a small text).
19. A concept piece of music to be not quite belong.
20. Only That Music is new music, When asked the question
Whether it is is at all is music (Spahlinger
1992).
21. The unmusical, the better.
22. In conceptualizing the contextualization follows
(Weibel 1993).
23. No concept without conceptualism.